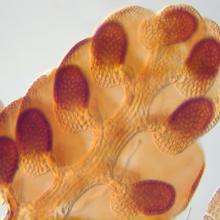 The open-access journal PhytoKeys –  known for applying cutting edge technologies in publishing and dissemination to accelerate biodiversity research –is pioneering an electronic-only publishing workflow in a series of papers published over the course of the first week of January 2012 (see press release).

As of the 1st of January 2012, sweeping new changes took effect to the way plant scientists name new plants, algae, and fungi. Traditionally, the publication of new plant names, which is governed by the International Code of Botanical Nomenclature (ICBN), has never allowed publication of new names in anything other than print on paper. Dr. Sandra Knapp from the Natural History Museum London, Deputy Editor-in-Chief of PhytoKeys and author of the first electronic-only description of a new species, Solanum umtuma (a relative of tomatoes and many other important plant species), published on 1st  of January 2012. See sciencenews.org article here.

or, in larger view:

The new liverwort species, named Frullania knightbridgei, is particularly noteworthy because it involved national and international participants from universities, museums, and government departments, and was named after a prominent New Zealand conservationist, Phil Knightbridge, who earlier this year passed away, who epitomized the dedication and commitment of staff at the Department of Conservation. The continued collaborative efforts between agencies such as the Department of Conservation and international research institutes such as The Field Museum and our partners, is vital to help uncover more of the as yet hidden biodiversity of this group of plants.

Liverworts are being increasingly recognised by everyday New Zealand people and world-wide as beautiful and important contributions to global biodiversity, as important environmental indicators and as potential indicators of global warming. Indeed, in 2011, two liverworts – the highly threatened Frullania wairua (itself known only from a seriously threatened tree, Bartlett's Rata) and Lejeunea hawaikiana – received a top 10 listing in the annual New Zealand Plant Conservation Network "vote for your favourite plant" competition. The new species is also listed on the New Zealand Plant Conservation Network, possibly the first conservation website to have listed the species, which is only known from very collections.

Ecological and evolutionary significance of liverworts. Liverworts (Marchantiophyta), belong to a group of green land plants generally known as bryophytes, which also include hornworts (Anthocerotophyta) and the more familiar mosses (Bryophyta). Together, these three lineages constitute the second largest group of land plants after flowering plants. A growing body of evidence identifies liverworts as the earliest diverging lineage of land plants. Their sister relationship to all other land plants puts liverworts in a pivotal position in our understanding of early land plant evolution. Liverworts are an important component of the vegetation in many regions of the world, constituting a major part of the biodiversity ranging from moist forests to tundra ecosystems. The ecological significance of liverworts, in concert with mosses and hornworts, is well documented, e.g., they play a significant role in the global carbon budget, plant succession, nutrient cycling, water retention, and offer critical microhabitats for a tremendous diversity of other organisms. Due to their unique eco-physiological properties these plants are important environmental and ecological indicators and have been used as indicators of past climate change and as potential indicators of global warming.